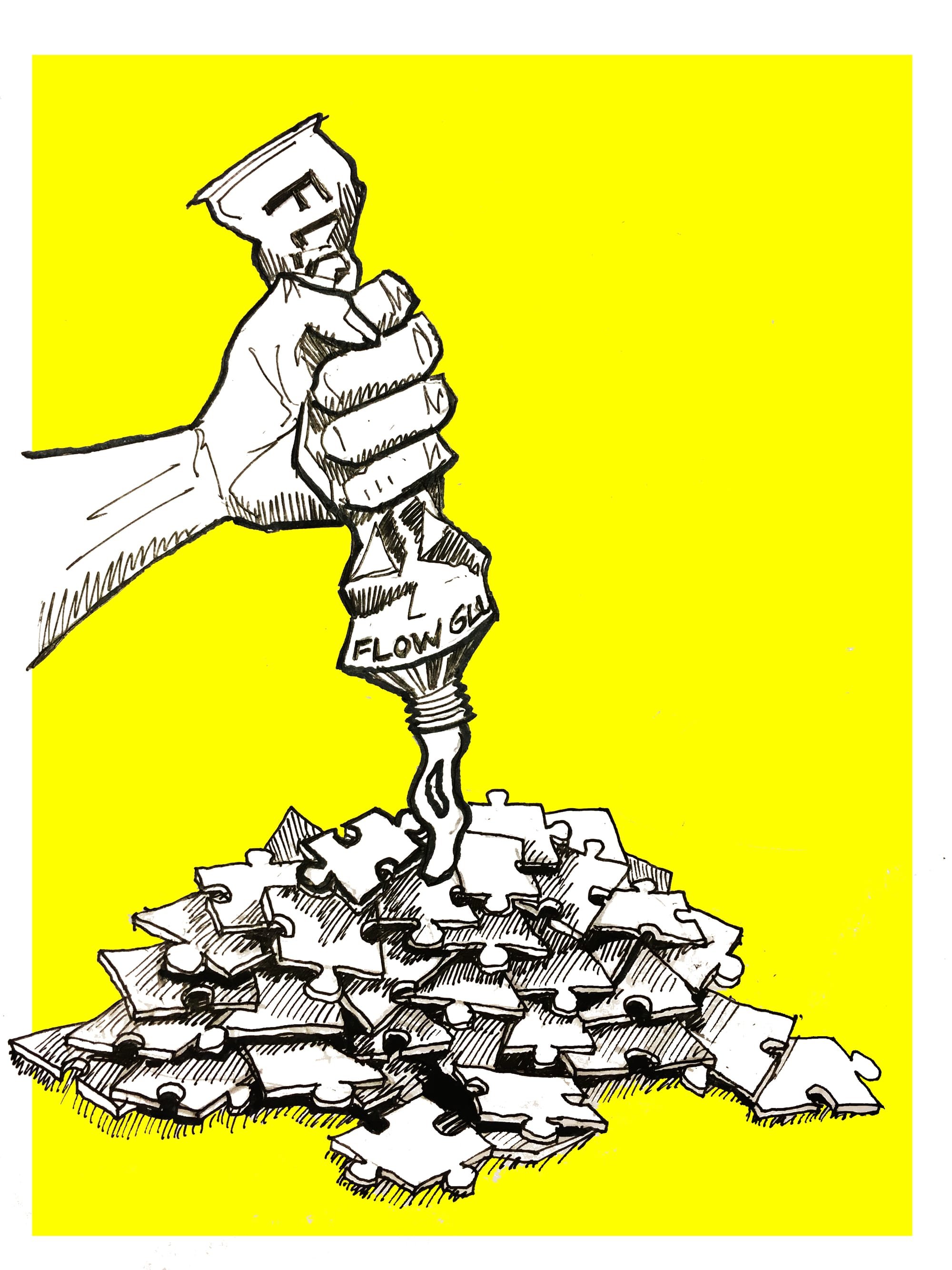 How flow is understood -  fast & fluid
„Thou shalt move fluidly!“ is echoeing in the heads of pk dudes and dudettes...because flow is seen as an unshakeable attribute of good movement and is mostly equated with fluid movement.
Flow is understood and practised commonly as a fluid connection of several moves. This is achieved by either connecting moves with other inbetween moves like lazies, rolls etc, minimizing steps between tricks/movements or just that each movement melts into the next one, so that there is no clear seperation. This connecting of movements is usually also tried to do fast. It is clearly recognized if you watch some art of motion submissions. It feels like freerunners are hectically trying to pack a way too small suitcase under intense hardcore time pressure. After watching 10 art of motion submissions you need a 10 hour „relaxing nature sounds“ Youtube video to come down again (no offense, this is ciritzising movement, not dudes and dudettes :D)

What flow is
"Flow" is first of all a word of course. And people determine what a word means. And if people understand "flow" as fluid movement, why  should i say that it actually means something else? Becauuuuuuse i think the reason why fluidity was put onto the movement map in the first place, and the reason why it became so important is something, which is not limited to fluidity, but was discovered firstly in the form of fluidity. Subsequently this something was mistakenly equaled to fluid/flowing movement, even though this something could have many other forms of expression.
So what is that something?
That something was a form of order behind movement. Something that made movements seem to belong together, as if they were of one piece. This „of-one-pieceness“ is easiest to recognize in fluid movement. All of a sudden a run doesn´t seem to be a random succession of independent tricks anymore, but the whole thing kind of seems to belong naturally together. But that doesn´t mean that fluidity is the only possible form in which that „belonging together“ is expressed. There can be other connecting links between seperate movements. Very often rhythm is the uniting factor in the background. You can recognize that most movement that you perceive as flowy is mostly rhythmical. Though i would hesitate to say that this is always the case, as then we could step into the same trap by saying: „Ahhh, flow is rhythm!“ And then we end up in the next flow-dogma, causing people to dance around on obstacles.
But now, even if fluidity makes movements look one, it doesn´t always fit. Sometimes it seems, that movement is artificially tried to make flowy, from the outside, as if you could use „flow“ like glue to stick seperately floating pieces of movement together.
Flow is really an order behind movement. A root out of which movement comes. And when all movements in a run come from the same root, then they will naturally belong together. They will feel like naturally belonging together, and they will look like that. This root can be rhythm, but it also can be a mood, that the mover is in. But there must be some kind of higher order, some higher authority behind the movements, out of which the movement comes. If the movement that comes through you is governed by this higher layer, then it comes out in a flowy way and will have a connecting link, a pattern.

Pulling the foot over the shoe
If you reverse the chronological order, and try to put seperate movements together first, and then make it "flowy" by pulling over it some pre-conceived form of „flow“, it will just make your movement one clump of stuff that doesn´t belong together.
Imitating others with real flow, is imitating the manifestations of an unseen root without having the root. Your flow is then not real, it is just a copy of flow, a counterfeit – fake flow, not natural, artificial. In the best case you make a perfect counterfeit of the original. Nevertheless you will lack the most important characteristic of real flow: naturalness. Though surely the majority will not see the difference.

So no copying???
When we start out in any craft, we mostly cannot do other than copying. Even in learning techniques, we first imitate, nothing more. But the goal is not to have a perfect imitation of e.g. a precision jump. The goal is to understand the principles behind the precision jump. And when we have understood the principles, with have an intrinsic knowledge out of which comes the technique in whatever form necessary. That means that now we can also change the circumstances, change the form of the technique and play freely with it, because we have the principle. We are not anymore limited to the same exact jump that we imitated the first time.
The same counts for flow! Just copy those flows that you admire. But the reason to copy must not be to make your movement the same as the others (the original), but to simply understand the root behind it. And when you understood it, you really understood that individuals´ expression of flow. Then copy the next one, and you understand anothers individual expression of the same thing, and so on. And the more individual flows you understand, the more you understand flow itself, the great unifier, the grand composer… :D And out of this understanding of flow itself, your individual expression of flow will come to light and will naturally interlace your movement with sweet patterns.... If you get out the way with your construction kit, and sometimes leave some free space for your movement. Don´t let your flow role models become a movement dogma.
This is a process that mostly happens unconsciously anyway. But maybe if it happens mindfully, it can be fastened. But anyways, take your time, there is no hurry ;)

Examples
So i have looked for some examples of „non-fluid“ flow. I have chosen these two super fresh swaggy flows here, because they are kind of interrupted, which is rather rarely seen. Of course there are many many more unique and fresh flows out there! But you will have to find them yourself…